hello all, and greetings from brooklyn, ny. my name is jed and i'll be your host for the week. looking forward to chatting with you all!

i know that you're probably used to seeing russian here, but don't worry; my tweets are probably easier to understand than my speech.

i'll be traveling in japan this week, so my internet access may be a bit spotty. but i'll try my best to keep up with you folks. 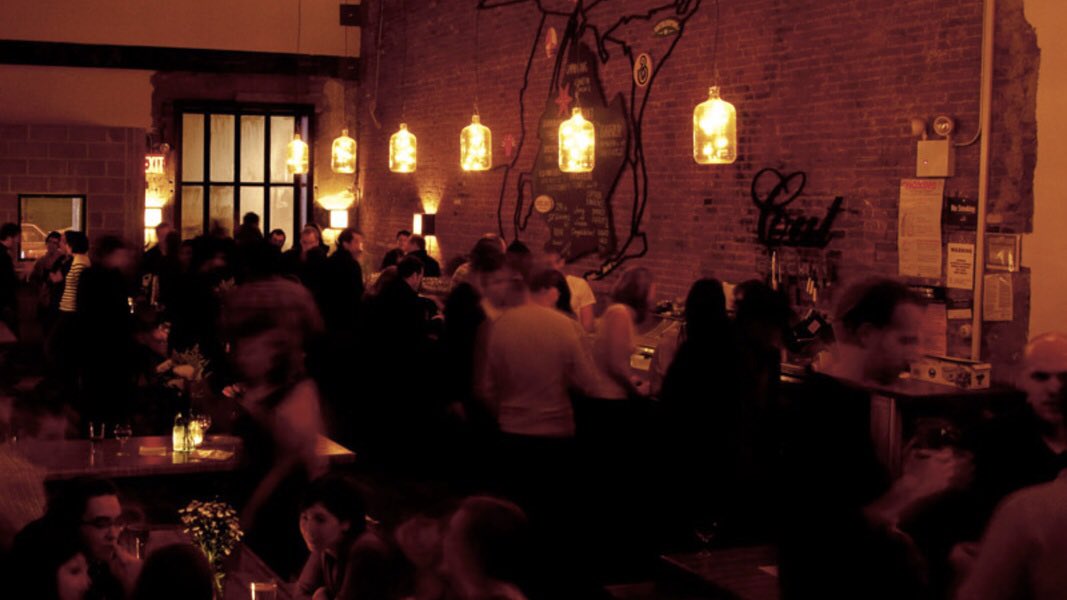 so i'm definitely up for talking about community-building. i wrote a post about it here: github.com/jed/building-b… pic.twitter.com/f3GOiFYg2K 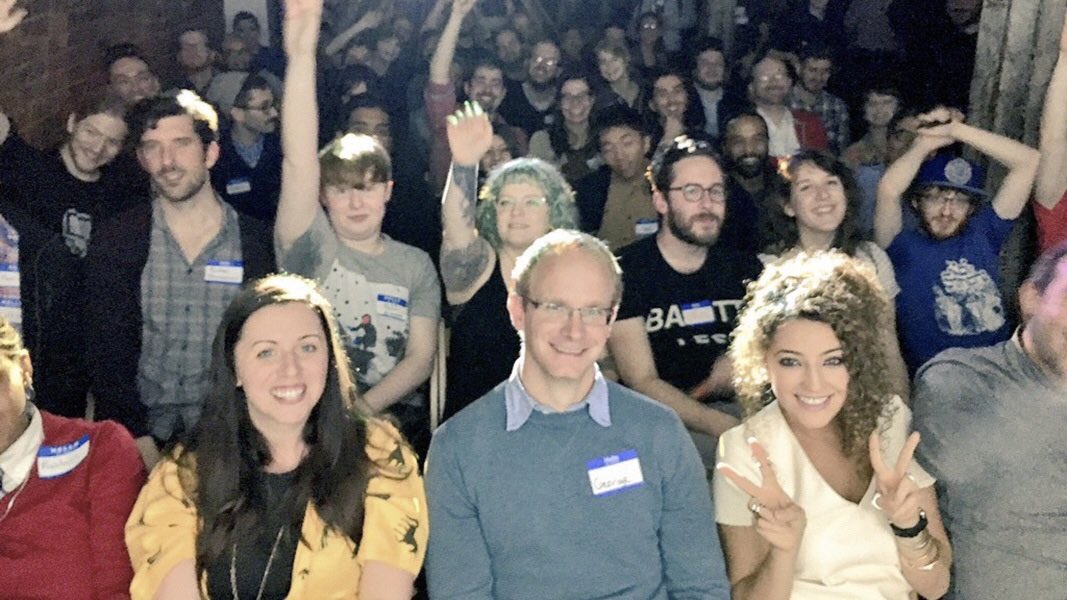 i started late in life as a programmer; my first paid tech gig was at age 35. studied economics on college, probably should've studied CS.

.@Rukomoynikov agreed! being a programmer is not that different than being a translator, it's just that your audience is less empathetic!

@jsunderhood Is this the only meetup in Brooklyn?

brooklyn has a ton of meetups (it's 2.5 million people), but i think @brooklyn_js is the only one dedicated to JS.

@jsunderhood Is this the only meetup in Brooklyn?

@jsunderhood Uniqlo is the best clothing store I've ever been to! What's it like to work for a Japanese company as an American?

i'm not a fan of JP corporate culture. i used to be an employee, but am happier now that i'm a separate vendor.

@jsunderhood Uniqlo is the best clothing store I've ever been to! What's it like to work for a Japanese company as an American?

i heard that everyone at UNIQLO japan (including the tech team) has to be in the office at 7am. i would not survive long, heh.

anyway, i'm going to get on the first leg of my flight to tokyo now, so see you folks during my LAX layover!

i learned about @jsunderhood from @subzey, my code golf hero. he taught me a lot, which i shared at @jsconfeu 2011: youtube.com/watch?v=JsAetm…

@jsunderhood Can you please tell more about @brooklyn_js, is it hard to organize?

sure! first up, most of my thoughts about running it are summed up here: github.com/jed/building-b…

@jsunderhood Can you please tell more about @brooklyn_js, is it hard to organize?

otherwise, @brooklyn_js developed a fair amount of momentum over the past few years, so the hard work now is creative. this is a good thing.

for those not familiar, @brooklyn_js is a JS meetup i started in '13 that tries to apply the production value of @jsconf to a monthly event.

@jsunderhood Does things always go well with BrooklynJS, or sometimes bad things happen? What was the worst?

we've dodged most of the pitfalls of tech events by having a clear code of conduct, and attracting a chill crowd.

@jsunderhood Does things always go well with BrooklynJS, or sometimes bad things happen? What was the worst?

setting the tone of the event[1] has helped us avoid bad actors, and attract a diverse group of attendees.

so really, the worst we've had to deal with are speakers bailing with no notice or sponsors not paying on time. which is a good place to be.

@jsunderhood Oh… I've meant rather technical failures, like power's down in the middle of the talk or speaker's notebook refusing to connect

ha, always! one of the reasons we do musical guests between talks is to keep audience distracted during tech setup.

@jsunderhood Oh… I've meant rather technical failures, like power's down in the middle of the talk or speaker's notebook refusing to connect

also, keeping the event small and lo-fi has helped reduce complexity. we don't need mics or have to worry about getting recordings right.

like many tech folk, my first insticnt was to fix tech issues with more tech. but we found more success through human/social workarounds.

@jsunderhood what are most common topics on @brooklyn_js? Is it full of reactjs hype, like Russian meetups are?

you can see them all here, only a small perecnt (4/247) have been react talks: github.com/brooklynjs/bro…

@jsunderhood what are most common topics on @brooklyn_js? Is it full of reactjs hype, like Russian meetups are?

to keep audience appeal broad, we try to avoid talks that are too specific. framework talks usually fall in this trap.

keeping talks diverse is probably easier in new york, where there's a ton of devs with cool side projects outside the usual front-endery.

our brother meetup, @manhattan_js, keeps it fresh with 1 passion talk for every 2 tech talks, on topics from cooking to fiction to icemaking

in shinbashi for some ramen hunting. pic.twitter.com/nvmkzz8nhr 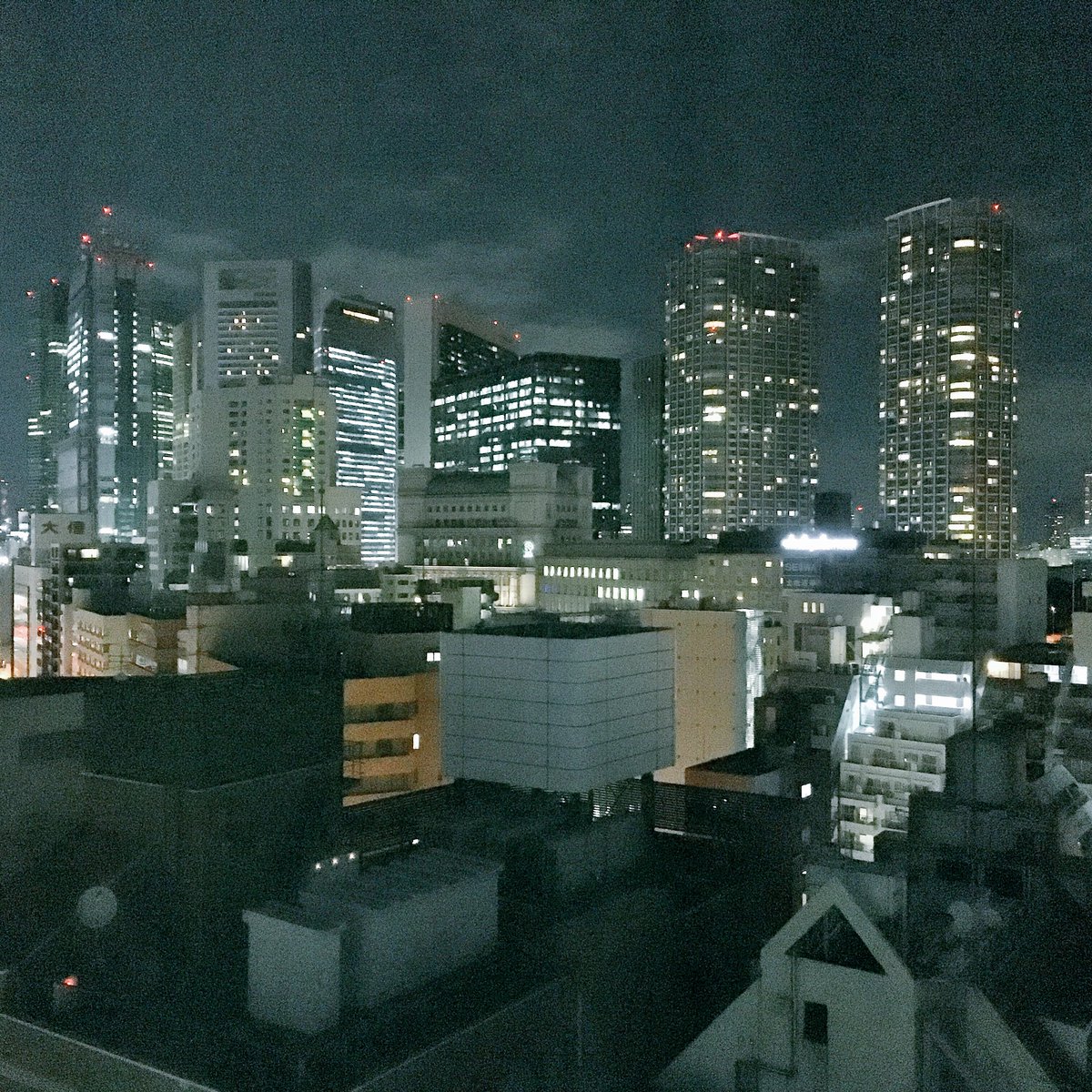 i'm kind of amazed how fast so-called best practices change on the front-end. a year ago inline styles were heresy, now everyone's doing it.

i gave a talk at a conference a year ago about leaving CSS behind and got a lot of pushback: youtube.com/watch?v=XjK03i…

when i wrote v1 of the UNIQLO mobile site in 2014, i used inline styles because CSS was too awkward. turns out it's a great way to do react.

my lesson from all of this is don't listen to people who tell you you're doing it wrong because "this is how we do it." it'll always change.

adding sets/maps/Infinity/NaN to the list of things lave will stringify, but JSON won't: github.com/jed/lave pic.twitter.com/621OU102aW

recently i've been geeking out on JavaScript ASTs. i feel like the next wave of JS creativity will happen there.

adding sets/maps/Infinity/NaN to the list of things lave will stringify, but JSON won't: github.com/jed/lave pic.twitter.com/621OU102aW

this is another area where i think the conventional wisdom of always separating data from logic will be debunked for some cases.

my development mantra is "tool little, tool late": i write vanilla JS first & bring in a framework when i need it. pic.twitter.com/9AkpqLU2AI 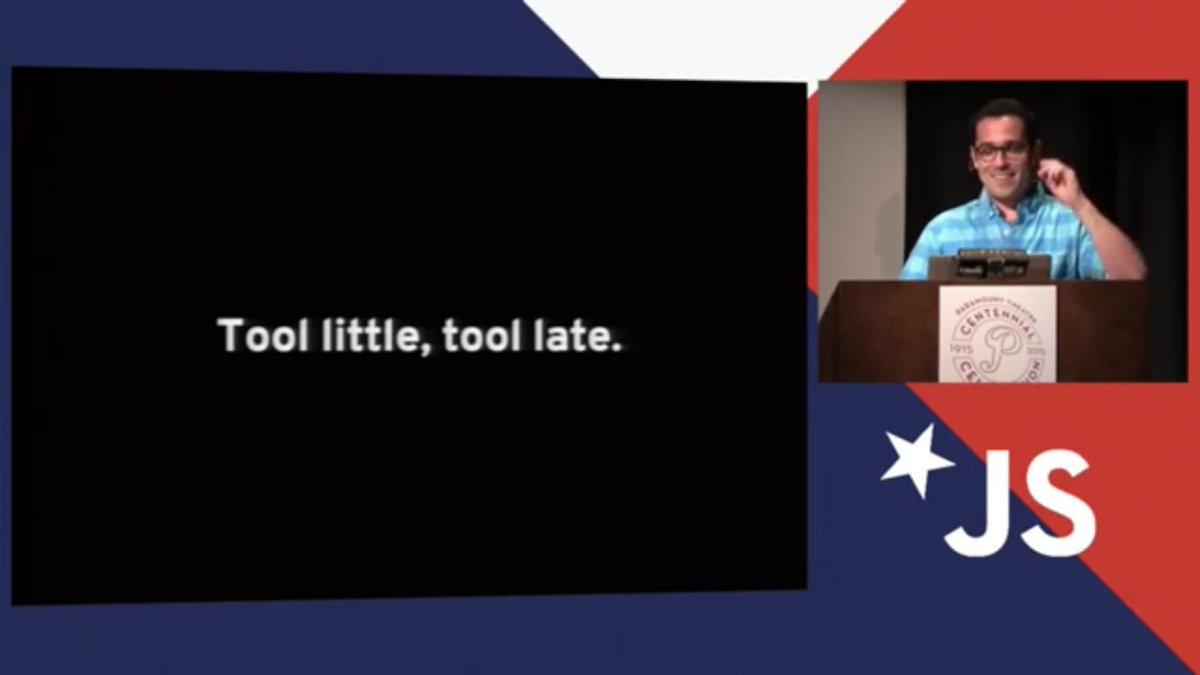 what do you all do? is there a go-to framework or boilerplate with which you start new projects?

one underrated part of OS X is that you can execute JavaScript to do browser automation.

i wonder if this could be a good alternative to requiring node for front-end devs, by running JavaScript in a local browser instead.

on the 🚄 to nagoya when hey, where's my bag? oh right, still on the platform. doubled back and there it was waiting. pic.twitter.com/izPsQmFHka 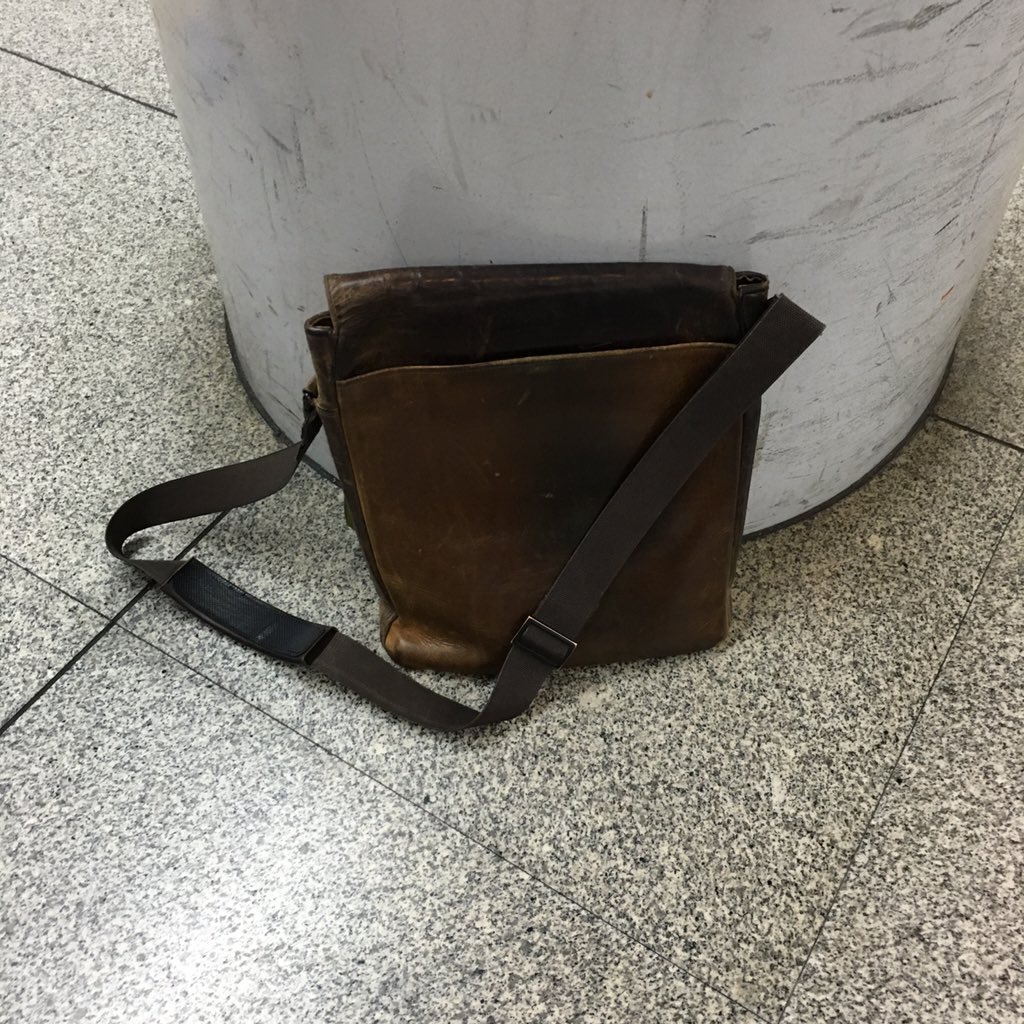 @jsunderhood what is your favorite brooklynjs talk? or maybe you have many..

wow, there are so many to choose from. let me give you a few of my favorites.

@jsunderhood what is your favorite brooklynjs talk? or maybe you have many..

WHAT IS CODE? We're finding out from Brooklyn's own @ftrain, the man behind this rad article: bloomberg.com/graphics/2015-… pic.twitter.com/8wIGm8FhIm

one of the most memorable was @ftrain's talk about What Is Code? i'd been a fan of his writing for a long time:

WHAT IS CODE? We're finding out from Brooklyn's own @ftrain, the man behind this rad article: bloomberg.com/graphics/2015-… pic.twitter.com/8wIGm8FhIm

We're closing with @tinysubversions, in from the frozen tundra of Boston to give us a spirited defense of "bad code". pic.twitter.com/xlw00e3xA1

likewise, @tinysubversions gave a great talk about the "bad code" attitude he brings to his side projects:

We're closing with @tinysubversions, in from the frozen tundra of Boston to give us a spirited defense of "bad code". pic.twitter.com/xlw00e3xA1

my favorite hardware demo is probably one from @benjamn, who had the whole audience on the edge of their seat: instagram.com/p/qkoZvkme_Z/

and @aemkei came over from hamburg to give a mind-blowing demo of his matrix quine:

and who could forget about the hottest take of 2015 from JavaScript's dad, @BrendanEich:

and some of my favorite talks are those that get their start at @brooklyn_js and then get picked up by larger conferences like @jsconf.

for a lot of recent admin UI work, i decided to use Google Spreadsheets as a front end and skip building an app: github.com/jed/sheet-down

it has its limitations for sure, but it's nice to just point someone at a spreadsheet and decouple the admin UI from the backend.

i struggle to give advice to first-time javascripters. the landscape is so different than when i started.

on one hand, cross-browser code is so much easier now than it was then, and the language has become more expressive.

on the other hand, there are so many libraries to choose from, and so many flavors of javascript to author. there's a paradox of choice.

securing a decent office for the week. pic.twitter.com/i1dal261le 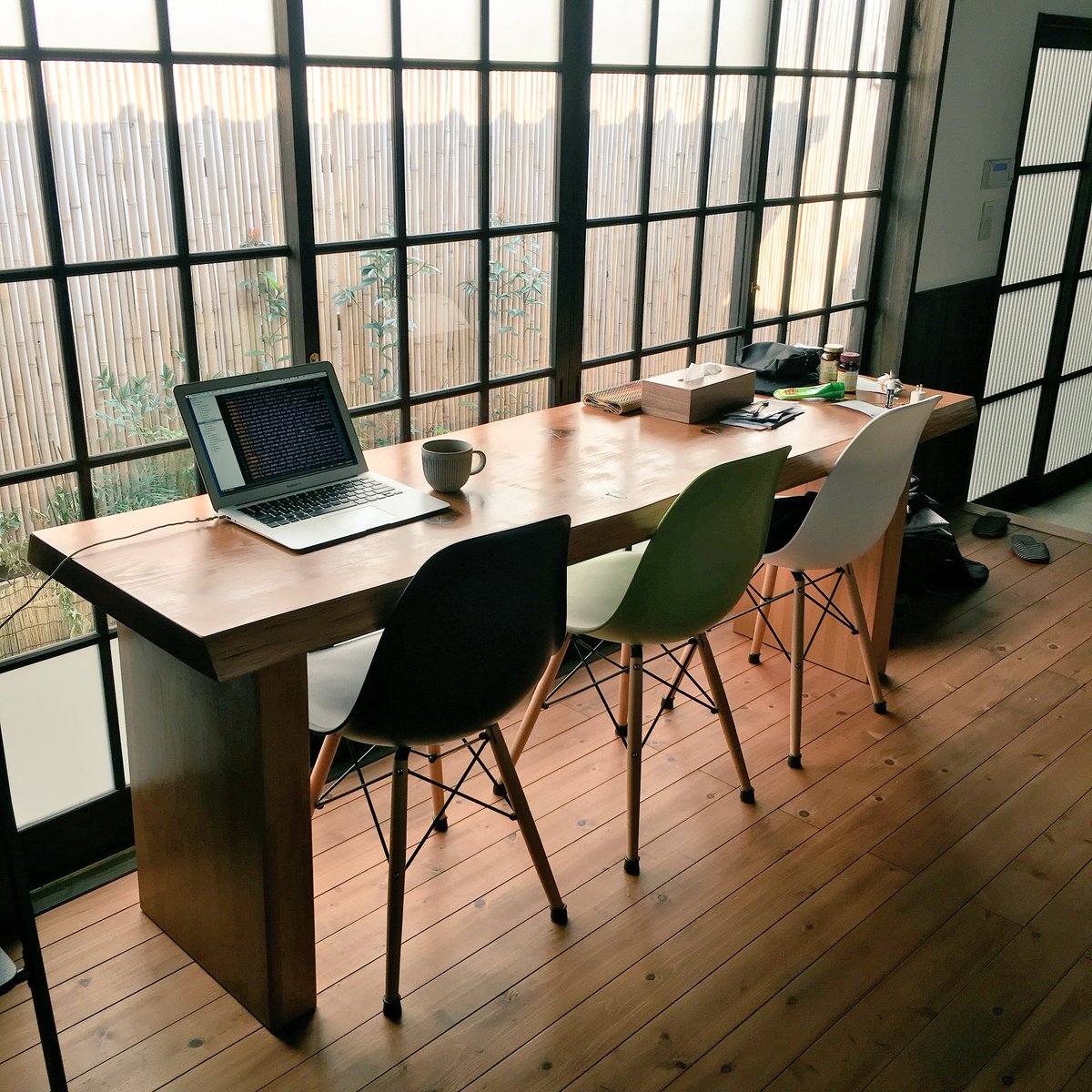 having spent ½ of my career converting japanese to english and the other ½ converting english requirements into javascript, i have a theory.

the farther apart the languages that you learn, the more you learn about language itself, since there's so much more to reconcile.

learning programming languages is really just the same thing, except that the speakers you communicate with are REALLY, REALLY unforgiving.

so the skills of a good programmer are the same as those of a good translator:

1) the ability to model the audience's internal state, and

2) the ability to create the most concise language needed to mutate it.

my favorite feature of ES6 is definitely template strings tags... there's so much you can do with them!

one fun front-end detour i had recently was learning arcane SVG path syntax to golf down my client's logo: jsbin.com/qopituke/1/edi…

it's been a fun week here, but my time is up! thanks for being a friendly bunch, and i hope to meet some of you at a conference soon!

i'll be over at @jedschmidt if you'd like to keep in touch. до свидания и спасибо!